In addition to all the recent house changes, I’ve been reconfiguring the home network to improve a couple things, and it’s been quite the saga. Here’s what I wanted to fix:

One slight problem with #4 is that the wireless adapter I use is not the official Tivo Wireless Adapter (which didn’t exist a couple years ago). TiVo doesn’t support WPA in adapters other than their official one, so it created a problem.

Well, I had gotten an offer from Fon to “upgrade” my Fon router to a La Fonera for free. I originally signed up in order to get the very nice Linksys WRT54GL, and was thinking about repurposing it once fulling my obligation was over, so this was an opportunity to repurpose the Linksys early.

Unfortunately, what I needed from the Linksys was to create a wireless to wireless bridge. This would connect to the 802.11n/g/b network with WPA2 as a client (direct wired not an option if I were going to solve problems 2 and 3). It would also work as an AP broadcasting on 802.11g/b with WEP to let the TiVo work. I took a look at a wireless distribution system to do this, but all settings must be shared, and I needed to have different security.

DD-WRT did not allow this setup, but I was pointed out to a beta version of v24 that has this bridging feature, which they call the Universal Wireless Repeater. The beta version worked, but in order to get traffic from my main router to route to the Linksys, I needed a static route to be configured. This feature only became available for my DLink router a few weeks before, so I went through the upgrade and I was finally all set up.

In testing, I found one more problem. The protocol TiVo uses for transfer of TV shows (but not anything else) requires the TiVo to be on the same subnet as the server. Bummer. Everything else works great, and at this point I’m resigned to a second transfer (server->Laptop->TiVo) to accomplish that.

As an aside, although I love my TiVo, unless something changes, I’ll be forced to move on at some point, based partly on issues like this, and partly on the lack of HD support without shelling out a ton of money on a series 3 and paying a monthly subscription fee (I have a lifetime subscription). While I think that Media Center is complex, expensive, and unstable for consumers, it’s likely HD support will be cheaper unless TiVo lowers prices, and I’m sure things will get more stable in Media Center world as we move forward.

Yikes…long post. Anyway, here’s a picture of where I ended up. 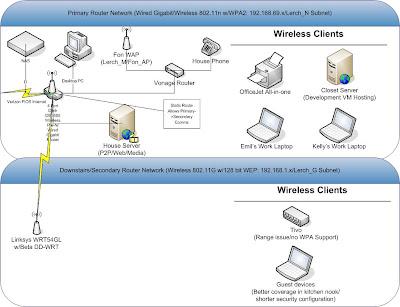